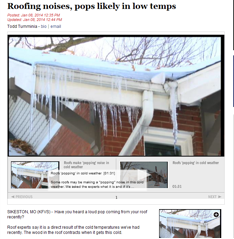 All across the northern half of the U.S., icy gutters tell the story of just how frigid conditions have been. However, in certain areas, homeowners report another sign of the brutal cold: roofs that go “pop” in the night. Though it’s unusual for a roof to make this sound, this doesn’t pose any major threat to the roofing structure.

Nothing to See Here

Norbert Delatte, engineering professor at Cleveland State University, affirms that a popping roof is no cause for serious concern. The phenomenon, which may sound like a shotgun going off, is a result of wood contracting in the frigid weather. Engineers take into account thermal expansion and contraction all the time when they build with various materials. Thanks to the significant drop in temperature over the past several weeks, it is inevitable that wood trusses somewhat shrink in the cold.

Contrary to popular belief, every building material—and not just metal—expands and contracts in extreme temperatures. Wood used in trusses and decking still have some amount of moisture left in them, so it’s no surprise when they expand or contract. According to wood experts, wood may change size by 1 percent for every 4-percent change in its moisture content.

The phenomenon is expected to continue as long as the weather is cold enough to trigger any contraction. As of this writing, Chicago is still experiencing subzero temperatures.

While experts say there is no reason to fret, they also say it’s better to have a Chicago roofer such as Rogers Roofing check the areas popping sounds come from for any signs of damage. As mentioned earlier, any well-built structure must take expansion and contraction into account. If not, the movements may cause critical support structures to buckle and give way.

Orland Park, IL roofing experts also say that the popping sound may also be an indication of possible ice damming. To avoid such a scenario, make sure your roof has proper ventilation.